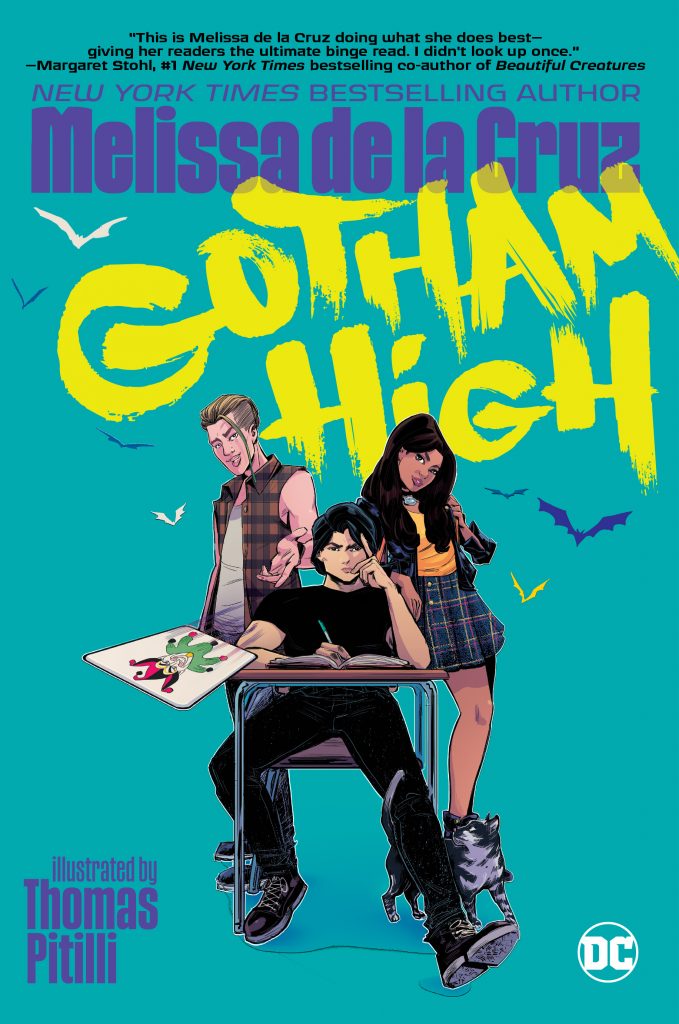 From Melissa de la Cruz, the #1 New York Times bestselling author of Alex and Eliza and The Witches of East End comes a reimagining of Gotham for a new generation of readers.

After being kicked out of his boarding school, 17-year-old Bruce Wayne returns to Gotham City to find that nothing is as he left it. What once was his family home is now an empty husk, lonely but haunted by the memory of his parents’ murder. Selina Kyle, previously the innocent girl next door, now rules over Gotham High School with a dangerous flair, aided by the class clown, Jack Napier.

When a kidnapping rattles the school, Bruce seeks answers as the dark and troubled knight—or is he actually the pawn? Nothing is ever as it seems, especially at Gotham High, where the parties and romances are of the highest stakes . . . and where everyone is a suspect.

With evocative art by Thomas Pitilli, this new graphic novel is just as intoxicating as it is chilling, in which dearest friends turn into greatest enemies—all within the hallways of Gotham High!

Fans of the Batman universe will love Gotham High and seeing how Bruce Wayne, Selina Kyle, Jack Napier, and a few of the other classic characters interacted with each other in high school. After being kicked out of boarding school, Bruce is back in Gotham City and reconnected with his childhood friend, Selina, who has some secrets she’s keeping.

Let’s start with my favorite part of the graphic novel—the artwork. The bold, vibrant art is gorgeous. It adds an edgy and modern feel to the story and creates an intense setting. The paneling changes up too, keeping the action and story moving forward.

The story itself was interesting enough. Full of love triangles, epic parties, and betrayals, it was easy to get sucked into the story. Plus there’s a bit of a mystery added in. This reimagining added diversity into the cast of characters, which I hadn’t been expecting but ended up appreciating.

Overall, I loved the artwork in Gotham High and would pick up the sequel if there was one.

*TW for faking a suicide*