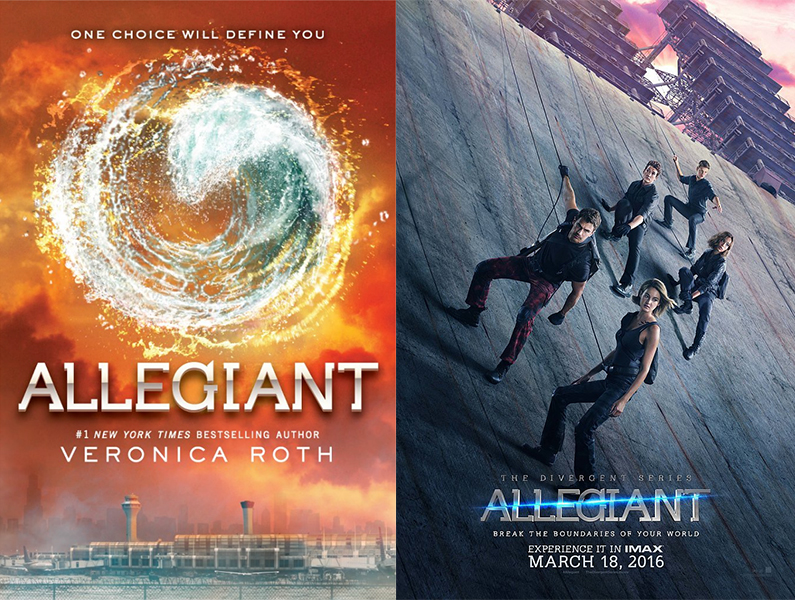 Allegiant, the latest installment in the Divergent movie series, released last week on March 18th. Again, like I said in my Insurgent book vs. movie comparison, I really do not remember too much of the story other than the major ending plus some other basic information like how Tris’s mother came from the outside and how people are either considered pure or damaged based on their genes. Like I said, I hardly remember anything, and the movie didn’t jog my memory all that well.

I think the main difference in this entire series is that movies were made more action-packed than the books, which I think is a good thing. From what I’ve been told/sort of remember, is that the last book was pretty slow. I think this is in part due to the book switching POVs back and forth between Tris and Four, which was obviously something that needed to be done with the death at the end.

That was one thing that the movie did well. They showed this switch of POV by focusing more on Four. However, towards the middle-end, Tris seemed a little disconnected and it was hard to relate/connect to  her on screen. I really did enjoy the focus on Four, though.

The special effects for the movie were phenomenal. While I don’t necessarily believe they were in the book, I really enjoyed how they added to the overall plot and action of the film. As I mentioned earlier, these films have been more action-packed and Allegiant is no exception.

Overall, while the film seemed very different from the movie, I still enjoyed the movie and look forward to the last installment next year, which has been renamed to Ascendant. I am curious how the end will be played out, and if they’ll keep the original ending from the book. I guess we’ll find out in a year!