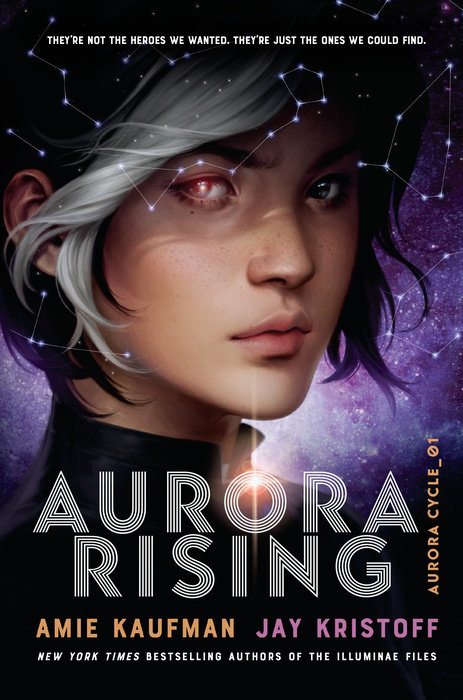 From the internationally bestselling authors of THE ILLUMINAE FILES comes an epic new science fiction adventure.

The year is 2380, and the graduating cadets of Aurora Academy are being assigned their first missions. Star pupil Tyler Jones is ready to recruit the squad of his dreams, but his own boneheaded heroism sees him stuck with the dregs nobody else in the Academy would touch…

A cocky diplomat with a black belt in sarcasm
A sociopath scientist with a fondness for shooting her bunkmates
A smart-ass techwiz with the galaxy’s biggest chip on his shoulder
An alien warrior with anger management issues
A tomboy pilot who’s totally not into him, in case you were wondering

And Ty’s squad isn’t even his biggest problem—that’d be Aurora Jie-Lin O’Malley, the girl he’s just rescued from interdimensional space. Trapped in cryo-sleep for two centuries, Auri is a girl out of time and out of her depth. But she could be the catalyst that starts a war millions of years in the making, and Tyler’s squad of losers, discipline-cases and misfits might just be the last hope for the entire galaxy.

They’re not the heroes we deserve. They’re just the ones we could find. Nobody panic.

I read and loved the Illuminae Files, but I was a little worried Aurora Rising would not live up to the that series since it was going to be told in regular book format (and not with the amazing unique format in Illuminae). However, I had nothing to worry about because Aurora Rising freaking blew me away.

Aurora Rising is told through seven POVs and switches between them fairly quickly, which helped me speed read through this book in  just a couple of days. So let’s break down our crew of misfits—we’ve got:

Tyler—the Goldenboy and leader
Scarlett—the twin sister, flirt, and expert diplomat
Cat—the best friend and badass pilot
Zila—smart, anti-social, and will do anything in the name of science
Finian—a sarcastic jerk and mechanical genius
Kal—angry, violent, misunderstood, and going to protect Aurora at all costs
Aurora—our girl who was lost in space for 200 years and now has telekinetic powers

The book begins right as Tyler is rescuing Aurora during a storm that is about to destroy them. Talk about a hook, amiright? Due to this daring rescue, Tyler missed the Draft, where he earned the first four picks as the top in his class. This a major bummer as now he’s stuck with the crew nobody wanted…well them and his sister and best friend who were not abandoning him under any circumstance. As they’re sent out on their first mission, a lowly supply run that must be some kind of joke, they find Aurora stowed away in the cargo bay and their true mission is revealed. All of a sudden they’re fugitives on the run, trying to figure out why this girl has powers, why they were assigned to protect her, and what in the world they are going to do next.

Sound amazing, yeah? Well add in a heist and a creepy ancient enemy, and now you got a freaking epic story. I absolutely loved everything about Aurora Rising—the crew, the plot, the setting. I did not want to put this book down, so much so that I even wanted to call in sick so I could keep reading (I didn’t but I was very tempted). It kept me on the edge of my seat and the wait for the sequel is going to be a hard one.

Overall, you’re not going to want to miss out on Amie Kaufman and Jay Kristoff’s newest sci-fi adventure! Fans of Illuminae will love the cast of characters and action. I know I did! Aurora Rising is definitely a new favorite, I cannot wait for my beautiful finished copy to arrive and for news of the sequel!