This past Sunday I was able to attend the LA Times Festival of Books! This was my second time at this festival as I also attended last year. I spent most of my day hanging out with two fellow bloggers, Karina @ 24 hr YA Book Blog and Camille @ The Literary Empress (soon to change to The Casual Fangirl). 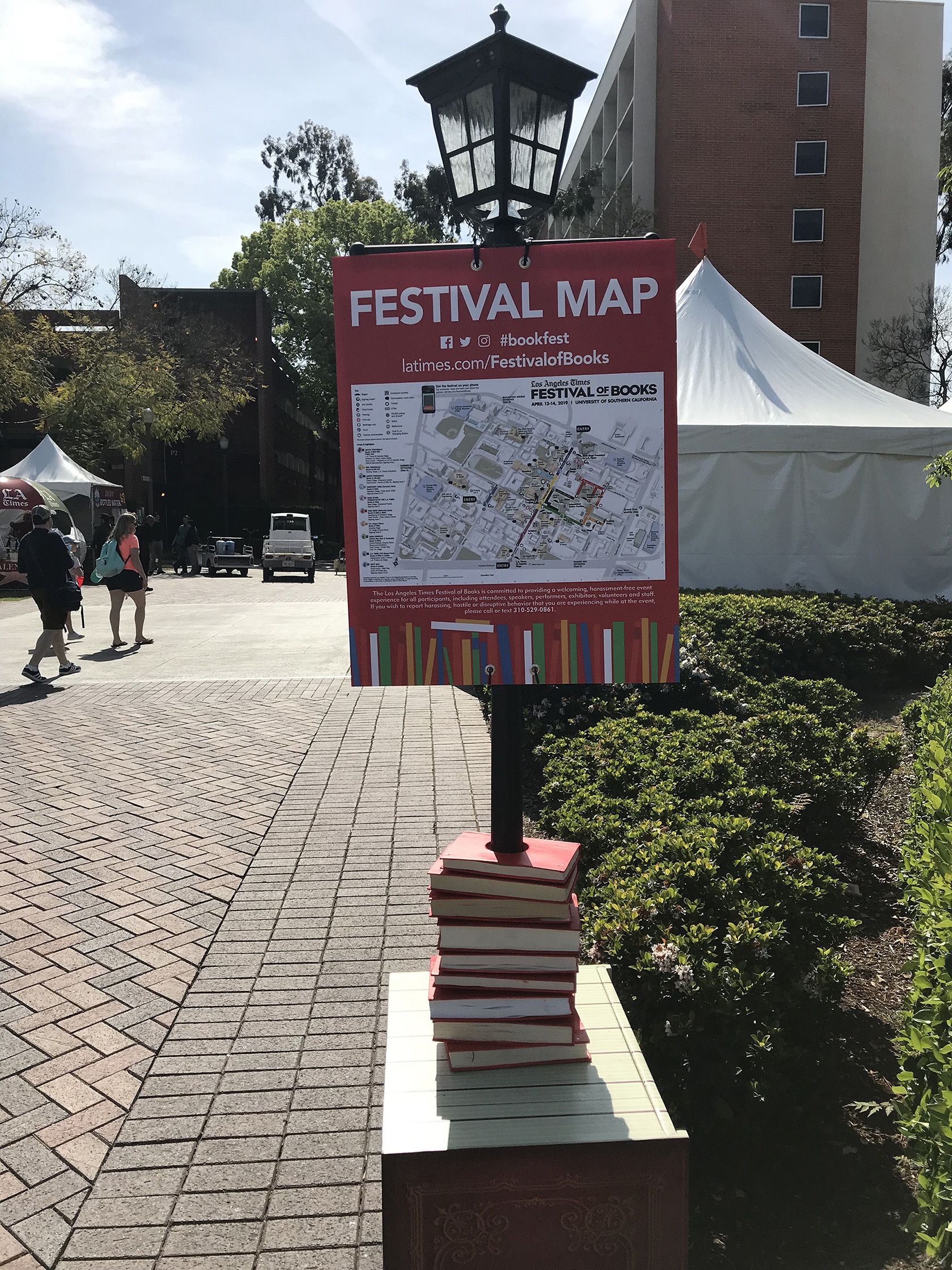 My first stop for the day was to pick up a press pass! As soon as I signed in, I headed over to the YA section of the festival where Julie Berry was signing books at one of the booths. She signed my galley of Lovely War and provided a fun little tidbit about it—the galley is actually 32 pages longer than the final copy. I headed straight to the YA stage after this signing to grab a seat for the first panel of the day, “Young Adult Fiction: Who Am I Anyway?” with Elissa Sussman, Kayla Cagan, Brandy Colbert, Sarah Enni, and Sandhya Menon. 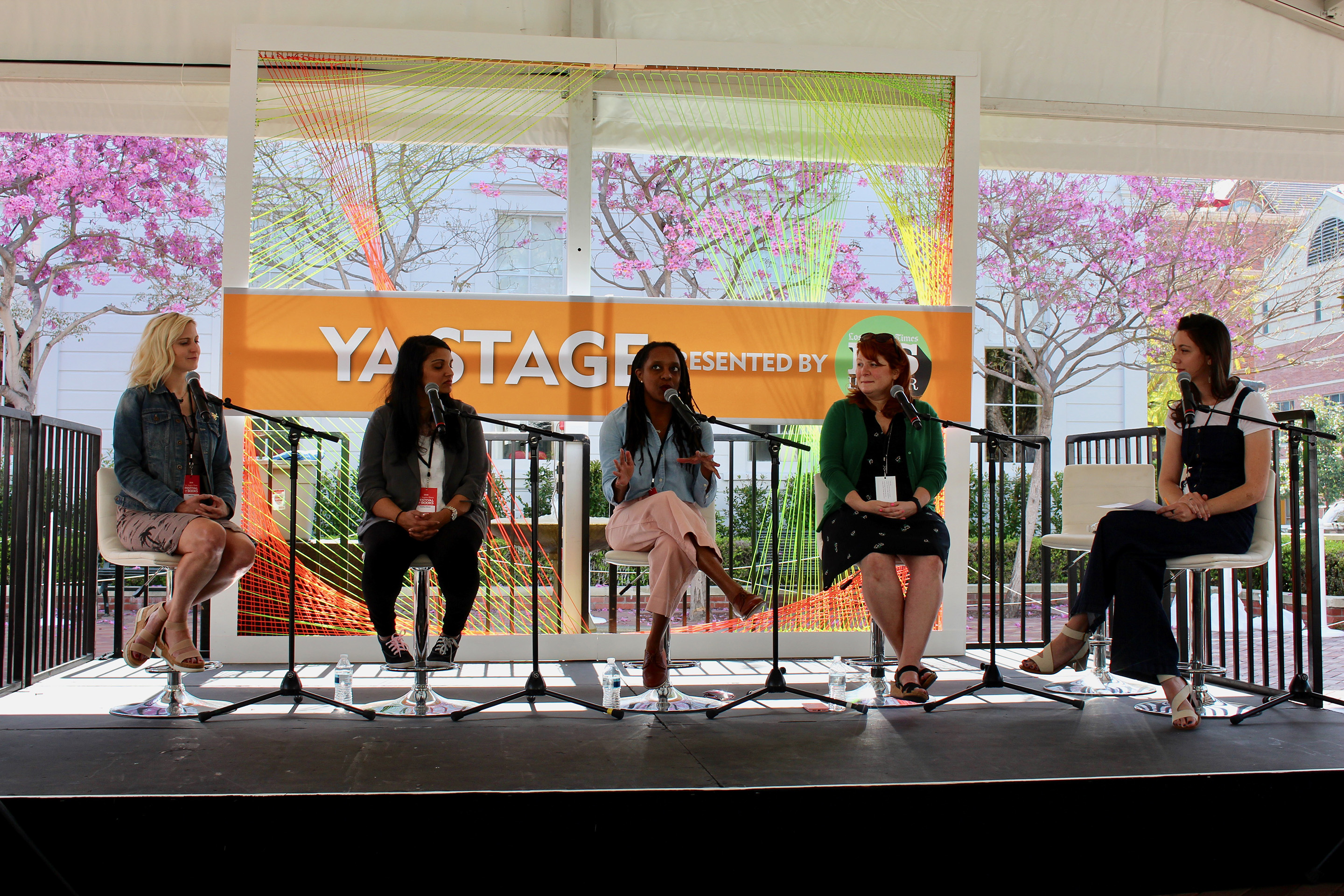 I really enjoyed listening to this first panel. Elissa Sussman asked great questions as the moderator and I loved how she made the connection that each of these authors’ characters worked with art somehow, whether that was film, photography, music, or visual media. It was kind of funny when the authors stated that they don’t like to write characters who also write as that sounds kind of boring to them and want to explore something else. After the panel, I jumped in the signing line and was able to meet these wonderful authors. 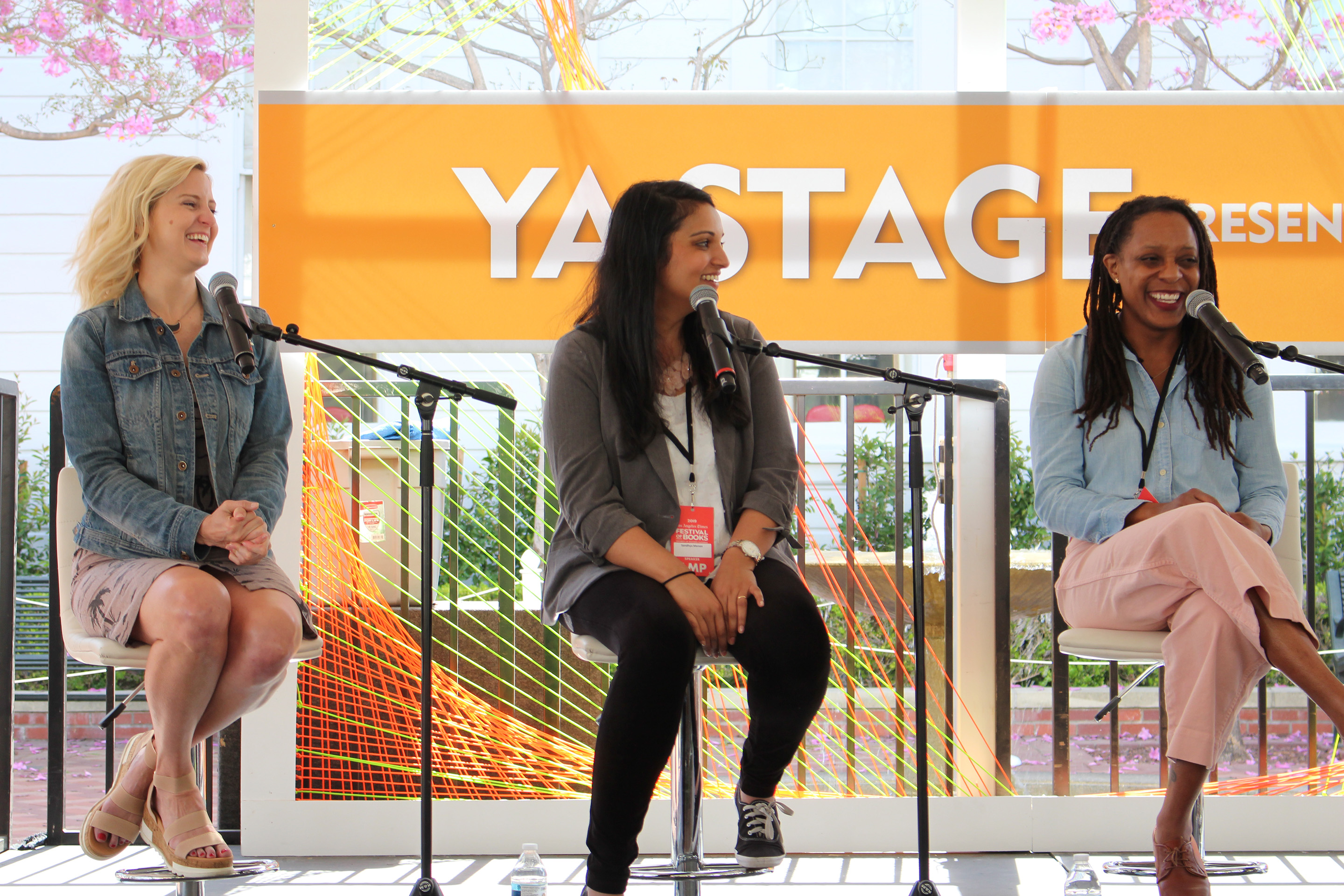 I stayed at the YA stage for the next panel, “A Lens to the Past: Historical Young Adult Fiction” with Sharon Levin, Julie Berry, Tonya Bolden, and Melissa de la Cruz. I’m a huge Hamilton fan so I loved hearing about Melissa de la Cruz’s inspiration and process of writing her Eliza and Alex trilogy. She was actually inspired to write this story after seeing how obsessed her daughter was with Eliza after they went to see the show. She pitched her idea to her editor in June and was told to have it written by January. Since this was such a fast turn around, Melissa hired two history professors to give her Alexander Hamilton’s backstory and she read the few biographies that are on Eliza. After the panel, I met Melissa de la Cruz who signed my books for me and then I headed over to one of the booths where Emily Wibberley and Austin Siegemund-Broka were signing finished copies of their upcoming novel, I’f I’m Being Honest. 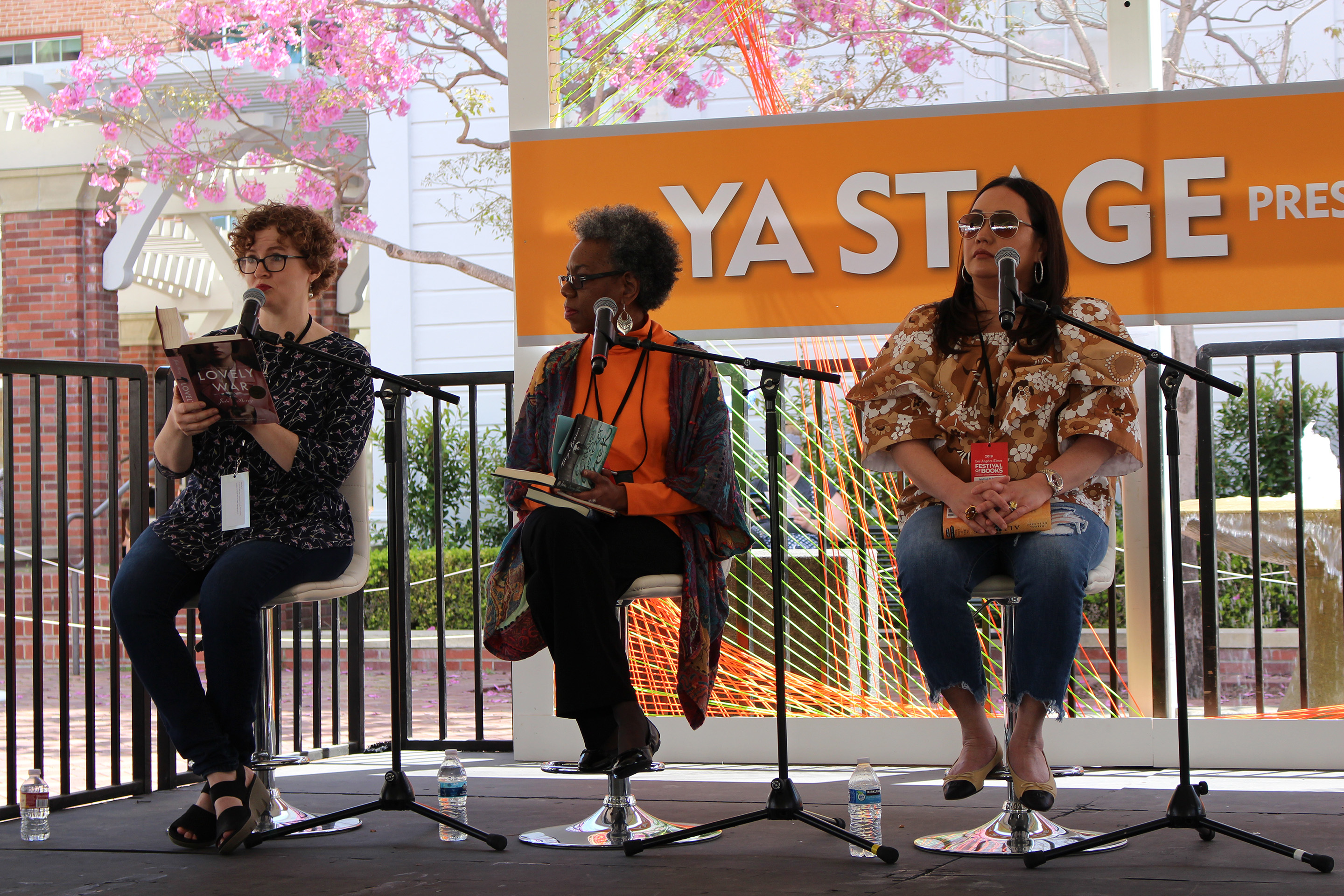 After the signing, I headed over the Leigh Bardugo’s conversation with Eva Chen. Leigh Bardugo is such an awesome author to hear speak in person. She’s so insightful, funny, enthusiastic, and smart. Every person in the audience is so engaged and enthralled by her. She talked a lot about the upcoming Netflix tv series adaptation and how diversity is a priority for the showrunners and writers. She also shared a bit about her upcoming adult debut, Ninth House. Fun fact, Leigh herself was in a secret society while at Yale. 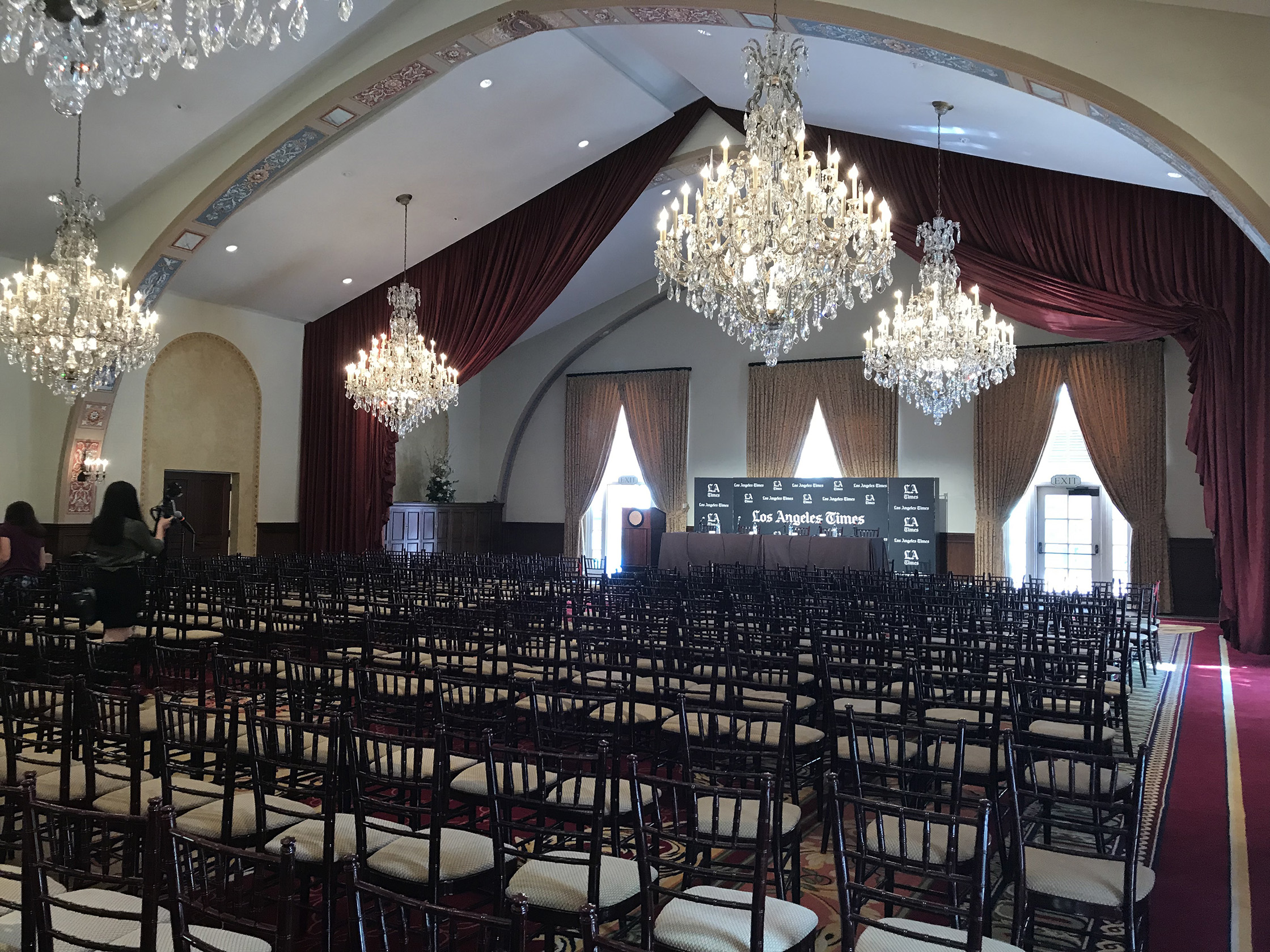 After Leigh’s talk, I headed back to the YA stage for my last panel of the day, “In My Feelings: Young Adult Rom Coms” with Kayla Cagan, Sara Biren, Melissa de la Cruz, Maurene Goo, Jennifer E. Smith. I adore rom-coms so I was so excited for this panel! I loved listening to them talk all about their books and the genre in general, especially when they mentioned their favorite tropes. Melissa loves it all—insta love, love triangles, just give her anything and everything! Jennifer’s favorite is best friends to lovers. Maurene also loves love triangles, which are huge in k-dramas. She also loves writing that part where shit hits the fan and everything gets messed up, but as a reader she hates it. Sara loves them all too—enemies to lovers, love at first sight, best friend’s brother, brother’s best friend, and all the variations. I was able to meet all of the authors after the panel, who were all so sweet. 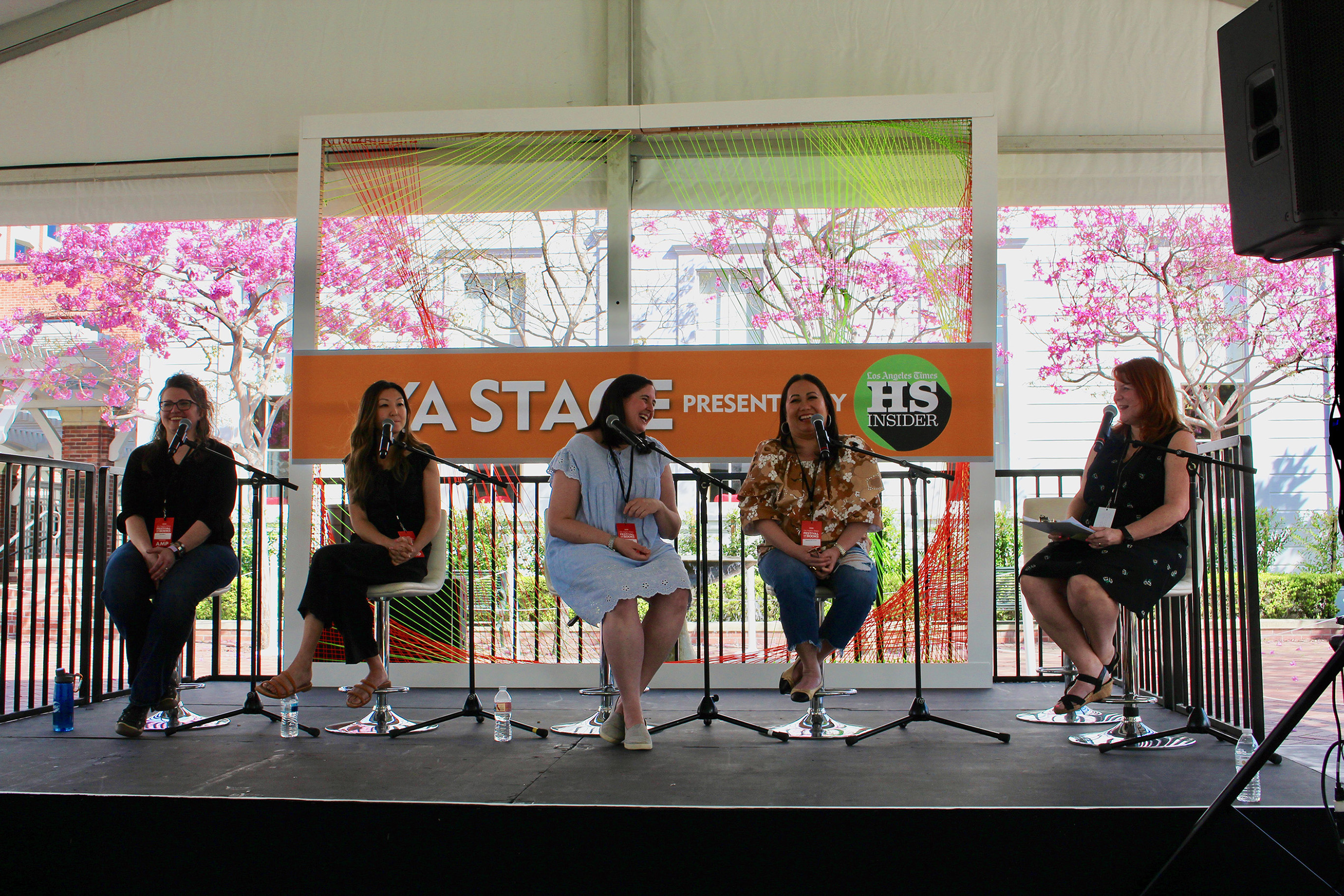 Overall, I had a fantastic day and look forward to attending LATFOB again in the future! If you live in Southern California, I highly suggest you check out this festival next year.