Book vs. Movie: The Darkest Minds 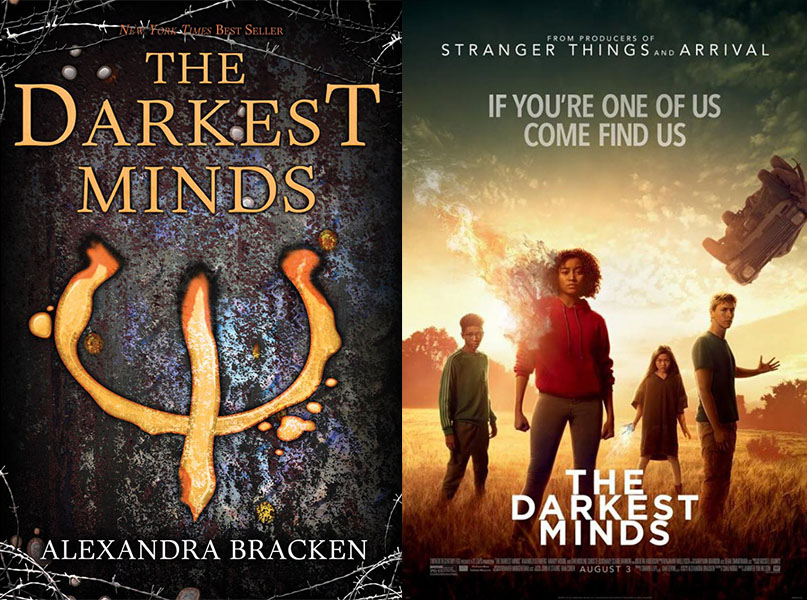 The Darkest Minds was one of my favorite series that I read while I was in high school—I actually read it before I started blogging! When I found out the book was actually becoming a movie, I freaked out because I was so excited. I loved revisiting this world and characters the past couple of weeks as I reread the book and watched the film twice!

So let’s get down to the changes the movie makes. Alexandra Bracken shared a few of the bigger differences the movie made beforehand, so it was less of a shock when they came on screen. First, Chubs is a Green in the movie instead of a Blue. Honestly, this change made a lot of sense to me because of his intelligence so he always seemed liked a Green to me when reading the books. Another difference is that the Yellows are classified as Golds so as to avoid any potential racial slurs (especially since Zu is the main Yellow we interact with). The last difference Alex shared was that Black Betty has been changed to Blue Betty for the movie.

Now onto the unexpected changes! In the book, Ruby is at the original camp with only Blues and greens. In the movie, there are still Golds at Thurmond. It’s also very clear that Oranges are the highest threat whereas Reds were classified as the highest in the book (an ironic misclassification that Alex created on purpose). Liam, Chubs, and Zu escaped from a smaller camp where there wasn’t even calm control. In the movie, the Black Betty gang definitely had definitely heard calm control before when Lady Jane ends up capturing them, which happens after they try to drop Ruby off in Salem (which never happens in the book). Oh and more kids escaped from the camp that Liam broke out of.

The biggest changes from the book happen towards the conclusion of the movie. In the book, Liam and Chubs want to deliver their friend’s letter to his dad. Jack and his letter are never mentioned in the movie, therefore Chubs is not shot by Jack’s dad. Instead, Clancy calls in the military (he calls his dad in the book and expects the Reds to show up which they don’t) and they bring some of the Red soldiers. The face-off between the Black Betty gang and Clancy differs from the book, and Ruby ends up bringing a helicopter crashing down. This causes an explosion, which burns Chubs and forces Ruby to call the Children’s League for help.

Besides Jack, a few other minor characters were missing. Ruby’s best friend at Thurmond is Sam. Ruby accidentally erases Sam’s memory like she did to her parents after San stands up for Ruby and is punished by an officer. An unarmed girl stands up for Ruby at the start of the movie, but we are never given a name and Ruby does not erase her memory (the credits do mention a Sam, though). Ruby originally escapes from the camp with another Orange—Martin. Martin is not in the movie at all, and Ruby’s escape is slightly different as well. In the book, the League had planted the different frequency to weed out any Reds or Oranges. In the movie, it was one of the officers who called for it so they were aware that Ruby was an Orange a lot sooner and she made her escape with Cate through the boiler room. Ruby also had to use her powers in order for the guard to let their car out. Ruby’s grandma is also never mentioned. She wants to find her and get to Virginia Beach in the book, which leads to a romantic story Liam’s tells at the end. Fans do not have to worry though because the story Liam tells is still very much in the movie! Lastly, Zu’s cousin is not in the movie, which led to Zu being at East River when it was raided. Liam ended up helping her escape and put her on a track with several other kids before he went back to look for Ruby and Chubs.

Some minor changes include there being no RV park and the gang visiting a shopping mall instead of the old Walmart. Ruby’s power seems to be a little different too, which leads to Chubs figuring out the EDO clue instead of her. Zu’s hair is also long. In the book, her hair was shaved due to a lice break out in her dorm at the camp. The reason why Zu doesn’t speak isn’t mentioned either, which is kind of a bummer because it might be hard to understand why if you haven’t read the book. A bigger change that I can see fans not liking is that Liam is not Southern, so there are no “darlins'” to be said in the movie, but Harris Dickinson still pulls off Liam’s natural charm. Lastly, after Ruby sends Liam away, Cate brings her to the other kids with the League and makes it seem as if they are about to start a revolution with their painted hands/foreheads.

Seeing all of that written out makes it seem as if the movie is way different compared to the book, but I honestly do not think that’s the case at all. It was actually a very faithful adaptation (especially considering how long the book is), and I loved how the actors portrayed the characters. Skylan Brooks absolutely killed it as Chubs, and I cracked up laughing several times with his timing on his jokes. There are so many scenes that fans of the book will appreciate and love seeing come to life. I was actually surprised that the Watership Down portions were kept in the movie! Overall, I really enjoyed watching The Darkest Minds and hope that Never Fade will be made into a movie next!