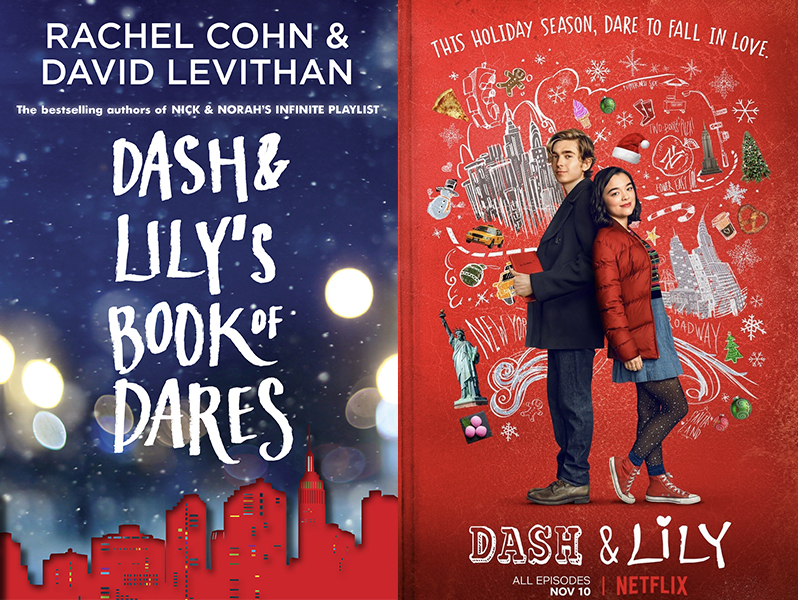 Season 1 of Netflix’s latest YA adaptation, Dash & Lily, is here just in time for the start of the holiday season! This fun romcom is based off of Dash and Lily’s Book of Dares, so let’s dive into the differences between the the book and show.

While Dash & Lily is only eight episodes, it sure manages to follow the book fairly closely. Dash and Lily “meet” through a red notebook Lily leaves in The Strand Bookstore full of clues. From there, their relationship blossoms as they begin corresponding back and forth through it, leaving dares for each other to complete across New York. The book is told through two POVs, and I love how the show translated this into its episodes (especially in the first two). The first episode follows Dash as he finds the notebook—we don’t find out who Lily is until the end of the episode. The second episode then rewinds time and shows her POV of setting up the first clues with her brother. This was a fun way to show the timelines and POVs!

The beginning dares stayed pretty true to the book—the clues in The Strand, dropping off the notebook at a video store (or well a DVD section at a pizza shop since you know, video stores don’t exist anymore), visiting Santa at Macy’s. The other dares start to differ for the show, some are similar but portrayed in different ways (like making the muppet and the club) and then others are completely different. But there are little nods to the ones in the book, like the DVD Lily choices in the pizza shop is Grandma Got Run Over by a Reindeer, which was a dare in the book Dash set up for her. Collation, a made up Pixar movie in the book, also makes an appearance in the later episodes, which I honestly wasn’t expecting to see. It was fun seeing all these small details make it into the show, almost as Easter eggs for people who’ve read the book.

One of the bigger differences are the roles Sofia and Edgar play. In the book, Edgar’s dog hate Lily’s gerbil when they were in elementary school, which was a pretty traumatic experience. In the show, Edgar made fun of Lily when she was in middle school. Where they almost kiss in the book, they do actually kiss in the show right as Dash finds Lily. As for Sofia, Dash was more heartbroken over their breakup (and more cynical towards Christmas because of it) in the show. When they reunite at a party, they end up leaving together and exploring a museum where Sofia declares she wants to get back together. Dash turns her down, whereas in the book they spent the night together at her hotel where they realized that they shouldn’t be together in the morning. Sofia makes an appearance again in the last episode, helping Dash pull off his big romantic gesture for Lily.

This leads us to the biggest change—the ending. In the book, Lily and Dash go on a date on New Year’s Eve and end at The Strand where Lily shows Dash the complete Oxford English Dictionary set and they end up being locked in the basement until the morning. In the show, Lily’s parent return early from their vacation, announcing Lily will be moving with them to Fiji and their flight will leave on New Year’s Eve. Knowing she’s about to leave and not wanting to lose her, Dash and his friends scramble to bring pieces of all their dares to The Strand, where Dash has set up a romantic gesture for Lily. Lily gets the note on her way to the airport, which she then promptly takes off out of the cab running to meet Dash. The beginnings of a potential second season starts to be seen as parts of book 2 (Lily staying in New York with her grandfather and Sofia and Boomer hanging out) play out at the end. Here’s hoping there will actually be a second season!