Book vs. Movie: To All the Boys I’ve Loved Before 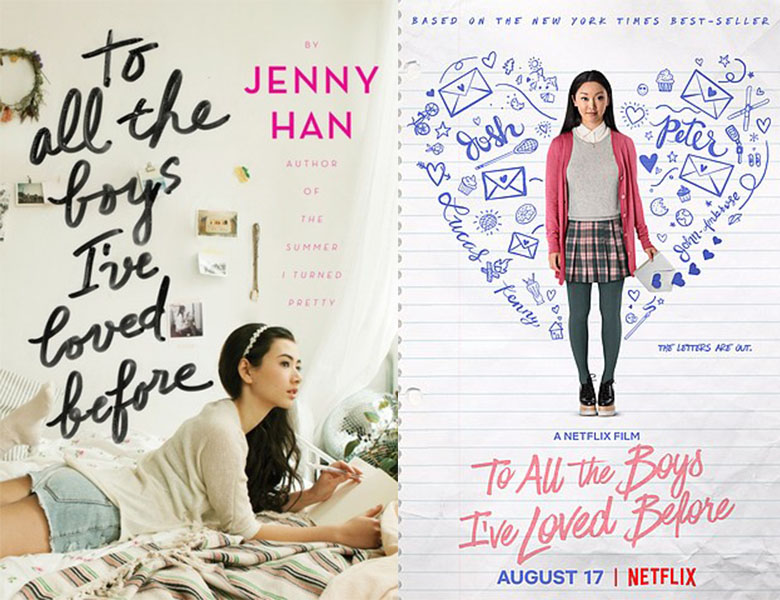 So I know that this post is wayyyyy late as the To All the Boys I’ve Loved Before movie released on Netflix three months ago. I had planned on writing this sooner, but instead I wrote 101 Thoughts I Had While Watching To All the Boys I’ve Loved Before (which I had so much fun writing). One reason I had trouble writing this post is because the movie really is accurate to the book. Honestly, this is probably one of my favorite adaptations of all time. Lana Condor really captures Lara Jean’s personality and Noah Centineo brings Peter K.’s charm to life.

Now to point out the differences. One of the biggest differences is why the letters were sent out. In the book, Kitty sends them out as revenge as Lara Jean was teasing Kitty about her crush on Josh. In the movie, Kitty is aged up a couple years and sends the letters out because she thought this would help Lara Jean get a boyfriend. It was a mystery of who sent them out in the book at first, but the movie makes it clear. Another difference involving Kitty is that she constantly asks their dad for a dog in the book and she finally got one on Christmas. Even though Kitty doesn’t focus on getting a dog in the movie, I loved that she still asks for one at the airport after they drop off Margot!

In the book, once the letters are sent, Josh tries to confront Lara Jean about it. She sees Peter in the hallway so she blurts out that they’re dating and then runs and jumps into Peter’s arms for a kiss. In the movie, Lara Jean sees Josh coming after Peter confronts her about the letter and then she kisses him on the track. Peter later suggests that they should fake date so he can make Gen jealous so she’ll want to get back together. In the book, Peter hopes it’ll “break the seal” so Gen won’t cause any trouble for the next girl he decides to date. The letter itself also seems nicer in the movie even though we didn’t hear the whole thing—in the book Lara Jean lists Peter’s faults out. Before this happens, LJ gets into an accident and Peter stops to see if she needs help in the book (and Josh comes to the rescue). In the movie, Lara Jean accidentally backs up and hits Peter in the school parking lot.

One of the most accurate scenes was the hot tub scene as it really brought to life what was happening on page. The follow out after is where it starts differ from the book. Lara Jean only sits next to Peter for half of the bus ride home as she finds out about the rumor from Gen in the bathroom. In the movie, Gen slyly mentions that Peter spent the night with her and shows off LJ’s scrunchie. The ski trip itself came before Christmas unlike the book where it happened after so LJ came home to Margot and a decorated house (whereas Margot came home from college to find the Christmas festivities had already began). Josh doesn’t kiss Lara Jean in the movie (which I was happy to see removed). Josh and Peter still fight, which Margot overhears and causes the fight between the sisters. The hot tub video goes live and Margot helps Lara Jean fix the situation, which happens in book 2. I was glad that the end of the movie started into book 2 as book 1 ends with Lara Jean writing the letter to Peter. They don’t actually get together until the beginning of book 2! This was definitely an important change as you can’t end a rom-com like that!

One change I really enjoyed was more of a focus on Lara Jean’s friendships with Chris and Lucas. I loved seeing this form and her opening up to them as well as Peter and his friends. I wasn’t a huge fan of Chris in the books. She wasn’t really around, so I liked seeing her more supportive of Lara Jean in the movie. It was also fun watching Lucas and LJ using Korean face masks at the ski resort.

And now on to the smaller changes! Peter K. drives an Audi in the book and a Jeep in the movie. This is a noticeable change because he starts to drive his mom’s mini van in order to be able to drive both Lara Jean and Kitty to school, which is precious. Lara Jean is a huge reader in the movie whereas in the book her hobbies focus more on baking and scrapbooking. Another difference is that the movie is set in Oregon instead of Virginia. This really only becomes noticeable in the third book when LJ and Peter are applying for colleges.

At the very end of the movie we see a quick shot of John Ambrose McClaren. Peter doesn’t know who he is in the movie, but in the book he was Peter’s best friend in middle school. John Ambrose McClaren is the one who kisses LJ during spin the bottle and it’s later revealed that he wanted to ask LJ to a dance. Peter kisses LJ in the basement when they were in middle school after everyone left. Lara Jean goes to see him at Model UN while she’s fake dating Peter. She doesn’t talk with him there, but their friendship restarts in the second novel, which is why it’s exciting to see him at the end.

One part that disappointed me was how the sisters’ Korean heritage isn’t really mentioned as this is such a big aspect of Lara Jean’s identity in the book. I appreciated that they did add the Korean food scene, though. I know you can’t fit in everything from a book into a movie, but I was still sad when I heard the sisters say “Covey girls” instead of “Song girls” after they make up at the end.

Overall, the To All the Boys I’ve Loved Before movie was just as charming as the book and a truly accurate adaptation. The movie is definitely one of my new all-time favorite rom-coms, and I’m desperately waiting for news of a sequel!