Book vs. Movie: Along for the Ride 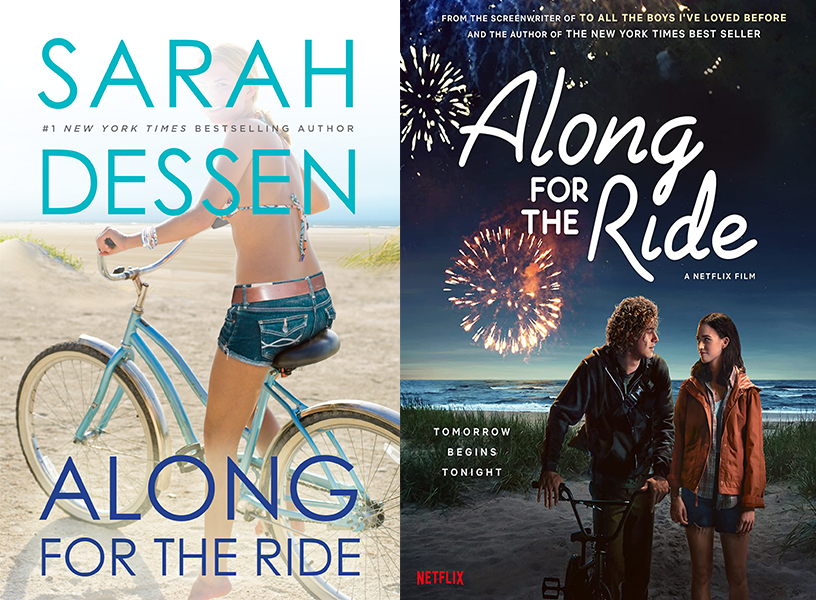 The movie adaptation of Sarah Dessen’s classic YA contemporary, Along for the Ride, dropped on Netflix in May! I had the opportunity to attend the premiere, which was such a fun experience! And now I’m here to breakdown some of the major differences between the book and movie.

First, I want to mention how close the movie followed the book in some of the smaller details! The book is very character driven, so I was curious about how this would transfer over to the screen. Some highlights of what made the cut: the food fight scene at the hot dog party, Clementine’s (and the vibrant design of Heidi’s office), and Maggie teaching Auden how to ride a bike. Most of the changes excluded the minor subplots in the book, which made the movie tighter.

Now for some differences! Right off, the movie begins with a senior bell tower tradition at her school. The book instead opens with backstory about Auden’s life: why she has insomnia, about her high school career, and her relationships with her parents, brother, and step mom. She had not been planning to spend the summer in Colby, but then has a change of heart and decides to take up Heidi’s offer for her to visit. In the movie, Auden planned from the beginning to stay in Colby for the summer and work at Clementine’s (whereas she kind of stumbled into the job in the book).

In the book, Eli has a few siblings (including Jake) and is good with kids. Auden spends more time with her baby sister in the book and Eli even helps soothe Thisbe at one point. His mother also comes and helps out Heidi when she has a breakdown, but Auden calls her mother to help Heide in the movie instead.

Speaking of brothers, Auden has an older brother, Hollis, who has been traveling the world for several years in the book. This is one of the bigger changes in the movie as he is not mentioned. There’s even a subplot in the book where he finally comes home and brings with him a serious girlfriend. Auden’s mom is a firm believer that no one can ever change, so this was included to show that people can and do change. Even though Auden does not have a brother in the movie, it still plays homage to him by including a picture frame that says “The Best of Times” at the end of the movie—which was his graduation gift to Auden in the book. Auden’s mother also has a subplot in the book where she is “dating” one of her grad students.

The prom scene at the end of the movie is very different as well. Instead of a grand gesture from Eli, prom is the theme of the town’s end-of-summer Beach Bash. In the book, Auden’s prom date who ditched her is in town for a convention and she decides to go with him. But then he ditches her again and so she asks Eli to go, who turns her down. He instead went to his bike completion (so Auden and their friends weren’t there like they were in the movie), but he does meet up with Auden at the Beach Bash afterwards. This was a change I loved as throwing a prom for Auden was a sweet gesture from Eli (and their friends).

Lastly, the end scene is different. In the movie, Eli sends a postcard to Auden from Barcelona, where he is competing. The book ends with Auden meeting Eli in a diner where they study together as Eli returned to college instead of competing.